WUDI is pleased to announce our spring book pick for 2022 –  The 99% Invisible City, A Field Guide to the Hidden World of Everyday Design by Roman Mars and Kurt Kohlstedt. It is our hope that we will be able to meet in person, come May; with that being said, this is not a book club meeting to miss!

In 2022, WUDI will be donating all proceeds from our book club gatherings. Our January book club donation of $100 went to Victoria Native Friendship Centre; a big thank you to all those who donated through registering! May’s book club proceeds will benefit Wear2Start, a volunteer-driven non-profit society and registered charity that helps women overcome barriers to success. They provide clothing, accessories, shoes, handbags and essential personal-care items, and co-ordinate services, such as haircuts and clothing alterations for self-identified women who require assistance in obtaining professional clothing suitable for work and life. In addition to donating our proceeds, we will also be encouraging our attendees to donate women’s business casual attire that may be sitting unworn in your closets. Learn more about Wear2Start, and the types of clothing donations they are looking for below.

About The 99% Invisible City 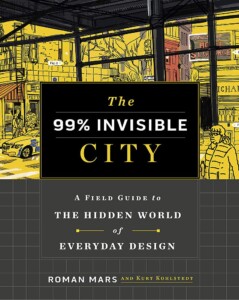 Have you ever wondered what those bright, squiggly graffiti marks on the sidewalk mean? Or stopped to consider why you don’t see metal fire escapes on new buildings? Or pondered the story behind those dancing inflatable figures in car dealerships?

99% Invisible is a big-ideas podcast about small-seeming things, revealing stories baked into the buildings we inhabit, the streets we drive, and the sidewalks we traverse. The show celebrates design and architecture in all of its functional glory and accidental absurdity, with intriguing tales of both designers and the people impacted by their designs.

Now, in The 99% Invisible City: A Field Guide to Hidden World of Everyday Design, host Roman Mars and coauthor Kurt Kohlstedt zoom in on the various elements that make our cities work, exploring the origins and other fascinating stories behind everything from power grids and fire escapes to drinking fountains and street signs. With deeply researched entries and beautiful line drawings throughout, The 99% Invisible City will captivate devoted fans of the show and anyone curious about design, urban environments, and the unsung marvels of the world around them.

About the Authors, Roman Mars and Kurt Kohlstedt

Roman Mars is the host and creator of 99% Invisible, a sound-rich, narrative podcast about the unnoticed architecture and design that shape our world. With approximately 500 million downloads, the 99% Invisible podcast is one of the most popular podcasts in the world. Fast Company named him one of the 100 Most Creative People in 2013. He was a TED main stage speaker in 2015. It is currently the most popular TED Talk about design with over 6.5 million views. His crowdfunding campaigns have raised over $4 million and he’s the highest-funded journalist in Kickstarter history. He is also a co-founder of Radiotopia, a collective of ground-breaking independent podcasts. Most recently, he co-authored The 99% Invisible City: A Field Guide to the Hidden World of Everyday Design, a beautifully designed and illustrated New York Times best-selling book about the built world.

Kurt Kohlstedt is a writer, editor, and producer at 99% Invisible as well as a New York Times Bestselling Author — The 99% Invisible City: A Field Guide to the Hidden World of Everyday Design is a critically acclaimed book about the built world. In addition to various interviews and conversations about the book, Kurt has gone on tour with 99pi, given talks, and participated in panels on various subjects from how kindergartens shaped modern design to creative reuse strategies for old architecture.

Back in 2007, Kurt founded WebUrbanist, the first in a series of online urban architecture, art and design and publications that would go on to reach hundreds of millions of readers. Previously, he studied philosophy (BA) at Carleton College before completing a graduate degree in architecture (M. Arch) at the University of Washington’s College of Built Environments. Over the years, Kurt has worked on residential, industrial, theatrical, furniture, graphic and web design projects and has been known to tweet about cities, design and synanthropes.

About Wear2Start
Would you like to donate your gently worn business attire? Bring donations to the 11th floor at 1175 Douglas Street (Colliers International) during business hours. Donations will be collected until May 25th. Need ideas of what to donate? Click here: Wear2Start Donation Guidelines 2022

In 2019, Wear2Start expanded their mandate to reach more women. When the organization was established in 2001, W2S aimed to help unemployed or newly employed women who needed a work wardrobe. Over the years, they have assisted thousands of women gain confidence and increased chances of employment through a more polished appearance. But they have heard from the community that there is a greater need. Some women need clothing for a meeting with a prospective landlord, a lawyer or a potential employer or attending a workshop, going back to school or appearing in court. They might need some up-to-date, stylish clothing after an emergency – fleeing an abusive relationship, a change in health or life circumstances, or almost any other situation that has meant losing access to clothing. They can also offer a little boost to the wardrobe and confidence of a single mom or woman of limited means who is struggling to make ends meet.

Wear2Start is happy to serve all self-identified women so that they can take a positive step toward a better future. The service is FREE of charge to the client.

Wear2Start accepts nearly new, contemporary, ready to wear, seasonal appropriate women’s business casual attire in all sizes. All clothing donations MUST be clean and ready to wear. No donations should be in need of repair.