The Future Outlook of Transportation in the Capital Region

Join us on Thursday, September 24th for a conversation with our region’s three major transportation providers. We will hear from Mark Collins, President & CEO of BC Ferries; Geoff Dickson, President & CEO of the Victoria Airport Authority; and Christy Ridout, Vice President, Business Development, at BC Transit – moderated by Jayne Bradbury Co-owner of Fort Properties and Past-Chair of UDI Capital Reigon

They will discuss how Covid-19 has impacted their businesses, what measures they are putting in place to adapt, and how they see their operations working going forward. 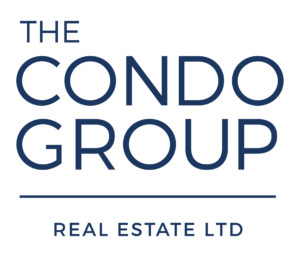 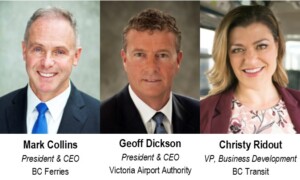 Mark Collins – President & CEO, BC Ferries
Mark Collins is a senior marine executive, having held leadership positions with BC Ferries for 11 years before becoming President & CEO. He was BC Ferries’ Vice President, Engineering from 2004 – 2012 and Vice President, Strategic Planning & Community Engagement from 2014 – 2017. His 35 years of marine experience also includes being President of Rolls Royce Marine Brazil and Rolls Royce Marine Italy, as well as several years in marine engineering on oil tankers, bulk carriers and container vessels.

He has a Master of Business Administration (MBA) in Transport and Logistics from the University of British Columbia, a Bachelor of Arts in Marine Geography from Saint Mary’s University and a Diploma of Mechanical (Marine) Engineering from Memorial University of Newfoundland. Born in Newfoundland, Mark understands the importance of a reliable ferry service to people’s lives, and to the social and economic health of B.C.’s coastal communities.

Geoff has over thirty years’ experience in the airline and marine transportation industries with a background in marketing, business development, operations, customer service and finance. He began his career with Canadian Airlines where he ultimately led the international marketing team in the development and expansion of the Airline’s global network.  He returned home to Victoria, BC where he joined BC Ferries as Vice President of Marketing and Business Development where he oversaw all aspects of their commercial operations.

Christy Ridout – Vice President, Business Development, BC Transit
As Vice President of Business Development, Christy is focused on the development of the company’s strategic priorities, including service planning and scheduling, communications and marketing, sales and revenue, information systems and smart technology.  Christy has an extensive background in strategic planning and project implementation, but leading people is her passion.

Christy joined BC Transit in 2008 as the Manager of Capital Programs, she then held the position of Director, Corporate and Strategic Planning.  Prior to this Christy worked with BC Buildings Corporation and BC Ferries. Christy has an undergraduate degree from the University of Victoria and is currently enrolled in the Masters of Public Administration program.  In her spare time, you will find her spending time with her family or enjoying the outdoors.